At Kona Fishing Charters, you will get to see all sorts of amazing fish from the Pacific Sailfish to the Mahi Mahi fish. We thought our readers might enjoy 10 cool facts about each of these spectacular Kona fish that you’ll see with us at Kona Fishing Charters. Today’s blog article is dedicated to the Sailfish, which you will hopefully see when you fish with us! 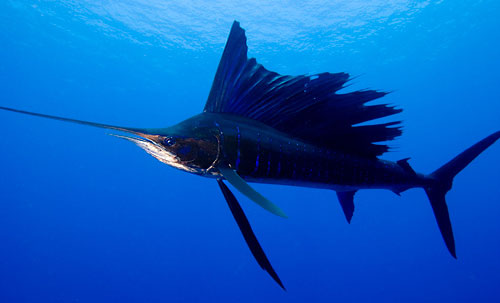 There are even more cool facts about the sailfish, that you can read about on National Geographic and other websites. Or, when you book a trip for a day of Kona fishing with us out on the open sea at Kona Fishing Charters, we’ll answer your questions as best we can! There’s nothing like seeing the sailfish for yourself, especially if you get to see it close up after you catch one!
Next time in our series of fish facts, we’ll give you some interesting facts about the Wahoo (Ono) fish, another fish you will quite possibly see when you come out to fish with us at Kona Fishing Charters! Call us at (808) 960-1424 to book your fishing trip!