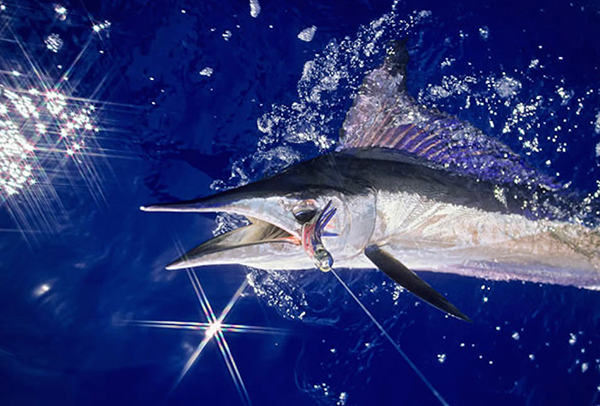 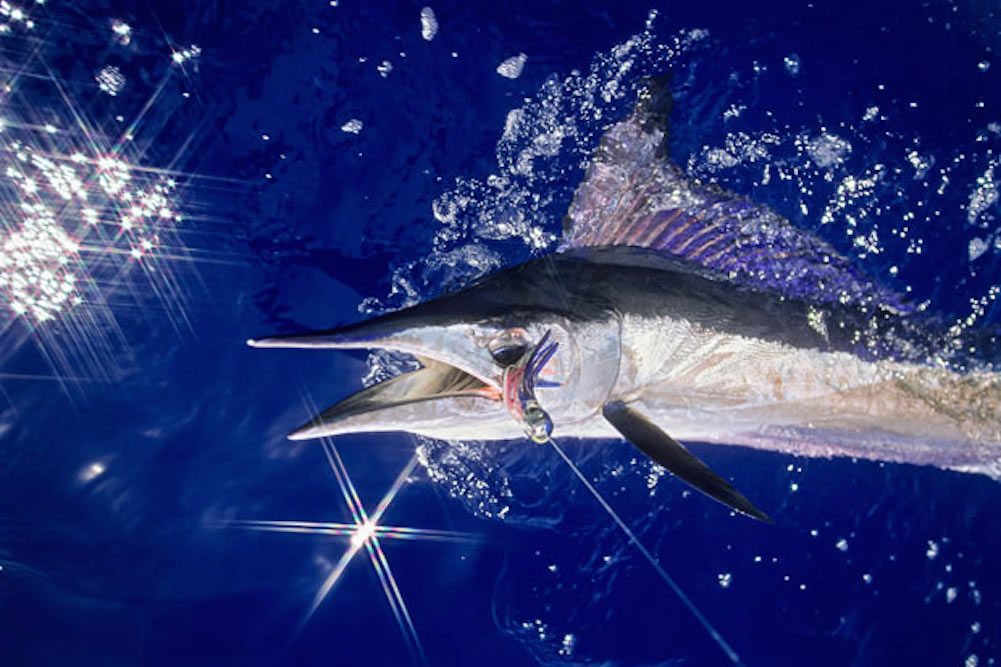 2. The weight and size of the Kona fish is fairly large. The largest recorded shortbill spearfish weighed 74 pounds and 12 ounces and this species can reach a length of 91 inches, though most do not exceed 75 inches. However, the average weight of the spearfish caught off the Kona coast is 40 pounds.

3. Spearfish are pelagic, offshore, deep-water fish. Spearfish are typically available all year-round in small numbers off the coast of Hawaii and other Pacific locales.

4. The Pacific Shortbill Spearfish can be distinguished from other billfish by its slender, lightweight body. It, of course, also has a short bill, as well as a dorsal fin that is higher than in marlin and lower than in the sailfish. The bill of the shortbill spearfish is barely longer than its lower jaw, whereas the longbill spearfish has a bill that is about twice as long as its lower jaw. However, it is still noticeably short when compared to that in other billfish. The dorsal fin is bright blue and has no spots. The vertical bars on the body are never as prominent as in other billfish and may show only slightly or not at all.

6. Available data indicates that the spearfish matures by the age of two and rarely lives past three years of age. Maximum age may be four to five years, but scientists are unsure.

7. The International Game Fish Association realizes that there is a difference amongst spearfish species and they plan on recognizing the distinction formally at some point. “We’re not opposed to it,” the President of IGFA says referring to the idea of splitting the categories.

9. Although the different spearfish live in different oceans from the Atlantic to the Pacific, they are not abundant in any one location and are rarely caught anywhere except Hawaii and the Mediterranean. This makes Spearfish difficult to catch. Their population levels are lower than most other fish in their genus and they swim deep underwater, far away from the surface.

10. Since they swim so far underneath the surface, all Hawaii spearfish are line-caught. Longline boats harvest most of the spearfish catch in Hawaii. However, spearfish are also caught by trollers using lures and baits.

There are even more amazing facts about spearfish. When you come fishing with us out on the beautiful Pacific at Kona Fishing Charters, we’ll answer your questions about all the different types of spearfish (or any other Kona fish) as best we can. But there’s nothing like seeing spearfish for yourself, especially once you hook one and bring it aboard the boat!

Next time in our series of Kona fish facts, we’ll give you some interesting facts about the Broadbill Swordfish, another Kona fish you will probably see when you come out to fish with us at Kona Fishing Charters! Call us at (808) 960-1424 to book your fishing trip!