The Ihu Nui (45′ Monterey) goes on its First Overnight Adventure! 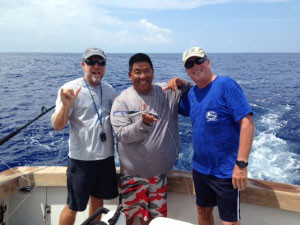 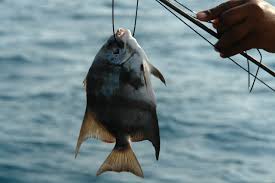 The Kona Fishing Charters ( 45 Foot Monterey ) went on its first overnight adventure down the coast toward South Point. Captain McGrew, Carlton, Captain Tony, Ed and Craig set sail early Friday morning and returned Saturday afternoon. This happens to be the same weekend that Kona once again hosted the World Championship Iron Man competition. We thought about entering the competition but gave that fantasy up and opted to venture out for something we are good at. We made the right choice and were once again blessed on the sport fishing front. We dropped our lures right out of the harbor and had our first knock down outside of town. It was a smaller Blue Marlin and never hooked up. Within minutes we had another strike and again did not hook up. Fish score 2, Kona Fishing Charters 0. Little did they know that we were always going to let them go anyway. Captain McGrew continued his remarkable fish finding by taking us to the B buoy where we had a  300 lb plus Blue Marlin look at our lure, bite the lure and then promptly send it back to us. Now the score is Blue Marlin 3, Kona Fishing Charters 0. I am happy to report that was the last 0 we encountered. Now it was the Kona Fishing Charters’s turn. Captain McGrew moved us into Ono lane and we picked up 2 nice Mahi Mahi. It was getting to be dinner time and we looked for a good spot to anchor up for the night. Manuka bay was just the spot. After anchoring both the front and back we broke out our new bbq pit that fits in our rod holder. Quickly the crew assembled the bbq and we were on to grilling steaks, fixing our salads, and cooking our rice. What a good way to end a fabulous day. You may wonder why we did not have fresh fish? More to come on that idea. Before turning in for the night we put lights in the water and watched the remarkable blue stick fish circling the boat. Also we watched the Nenue fish come to the surface when the light was turned out and quickly disappear when the light came on again.

After a good nights sleep we were up at sunrise trolling south in Ono lane. We caught 2 more Ono.  Now back to Marlin fishing. Captain McGrew took us back toward Kona with no luck on the Marlin but he spotted a small floating log and were rewarded with 2 Ono and 1 Mahi Mahi. Next stop the harbor and high fives for team Kona Fishing Charters.

Now back to eating our fresh fish. At the suggestion of Captain McGrew we all gathered up on Tuesday at our local Chinese restaurant with fresh fish in hand. The restaurant cut up the fish and prepared a delicious meal Chinese style. It truly does not get any better than this. Next time you are hanging out in Kona call Captain McGrew and try an overnight Kona fishing charter. You won’t be disappointed!