THE MANY FLAVORS OF IHU NUI

It probably would not surprise you that team Kona Fishing Charters is not just your plain vanilla fishing operation. In fact we have a celebrity, Captain McGrew Rice. McGrew serves as a member of the Western Pacific Regional Fishery Management Council. This is an important council that meets regularly and is part of the world wide effort to make sure our waters and fish are properly taken care of . He is unique in that he represents those that are on the water every day with first hand knowledge that influences decision makers. McGrew was asked to apply for this position and then was immediately chosen for the council. A smart move by the Western Pacific Fishery Council. For those not familiar with this effort here are the guiding principles for the council.

1. Support quality research and obtain the most complete

management, including reducing waste in fisheries

and minimizing impacts on marine habitat and

and traditional fishing practices in managing

to achieve the most effective level of monitoring control

and surveillance and to ensure safety at sea.

We could not be prouder to have Captain McGrew represent us in this endeavor. Just to prove we are not the only ones that are proud of McGrew he has been elected to be the vice chair of their team. What a nice compliment for his efforts.

As always we appreciate your continued enthusiasm for team Kona Fishing Charters and look forward to your next visit to the big island with a day on the beautiful calm blue waters of Kona.

Good weather, calm beautiful pristine waters, and year around sunshine wait for your next visit.

This has been a great start of the year for team Kona Fishing Charters. Not only are the new boats performing well the catching of big fish is the talk of the town. Captain McGrew Rice his sidekick Carlton Arai have been setting a torrid pace for the Kona harbor. By now you have all heard of the 1058 pound Blue Marlin that was landed several weeks ago. Kudos to the captain and crew but special kudos to Kai who was the angler. What a special treat to have a competent 16 year old in the chair for the grander. Little did we know that the news of the great catch would go viral and be viewed all over the world. If you are interested in seeing more about the Blue Marlin catch view the Kona Fishing Charters website as well as our facebook. There are videos posted from our Go Pro cameras that show you how exciting the day was. What has not been talked about as much is the crew’s catching prowess since the first of the year. Our Kona Fishing Charters fleet has landed a 996 pound Blue Marlin, a 741 pound Blue Marlin, a 550 pound Blue Marlin, and several others in the 450 pound range. In addition we have been able to continue catching Spearfish, Mahi Mahi and an occasional Ono. The yellow fin tuna have been more elusive but if any are caught on the charter boats you can be assured McGrew and Carlton will land more than their fair share.

We thought you would be interested in the following email put out by our harbor tournament organizer Jody.

that spearfish are granders favorite food, and when they come in, so do
the big blues.

People say a lot of things in fishing, but one thing when said is
noncontroversial – when it is hanging on the scales and weighs 1,058
pounds – its a Grander.

Yesterday was an epic “All Kona” kind of day when Capt. McGrew Rice and
Carlton Arai took out famous Big Island author, lure maker and McGrew’s
high school math teacher – Jim Rizzuto – and his grandson Kai and after
a well executed 30 minute battle, returned to the scale with the third
career grander of the dynamic duo team career of Rice and Arai.”

We hope your year has started as well as ours! Thanks for your continued support and encouragement. When your travels bring you to the Big Island please look us up. We will always keep the lights on for you. Good weather, calm beautiful pristine waters, and year around sunshine wait for your next visit.

Hollywood could not have written a Grander Story this well!

The stars were aligned last week in Kona when we invited the famous fishing chronicle author Jim Rizzuto and his 16 year old grandson Kai Rizzuto visiting from New York on his winter break. Just the day before we had released a 550 lb. blue marlin and a 100 lb. striped marlin so we knew we had our work cut out for us to top that one.

We were trolling outside of Kahaluu at about 1000 fathoms around 1 pm looking for that elusive grander. Then the fish struck the Eric Koya lure. An explosion of white water erupted and a 13 foot long marlin leaped out of the water in it’s place. Our deckhand Carlton yelled, “Big Fish! Get in the chair, Kai.”

McGrew likes to keep the fight short by maneuvering the  boat to stay close. A short fight is always easier on a fish you plan to release but it is much tougher on the angler, who has to fight the fish with the heaviest drag he can stand. The marlin jumped in about three large circles clear out of the water while McGrew kept the line tight, followed the fish and backed down hard. Because of the tight drag and the amount of energy that the fish put out at the beginning of the fight, it exhausted quickly and came belly up after about 30 minutes. No amount of resuscitation would revive it, which ended any possibility of release. They pulled the fish in and it’s tail stuck out of the doorway unable to close. Carlton measured out the “short length” (tip of the lower jaw to fork of the tail) at 139″ and the tail stump at 20″. Those lengths told us the fish would “go” over 1000 lbs. With a cast of congratulatory fishing friends to help, the fish was weighed and the scales tipped at “1058” lbs. The fish was then given to a few local families where over 100 people enjoyed this fish for many meals.

Usually the story ends here, however, the hype created by this amazing catch from a 16 year old quickly went viral and was all over the news around the word on NBC, CBS, ABC, CNN, FOX News, ESPN, fishtrack.com and other media outlets. Kai is now back in class in Manhattan, NY where he has already done many local interviews with the New York daily news  and TV stations. Kai will be telling his “Big Fish that didn’t get away” story for many year to come.

Spearfish Season is upon us here in Kona! 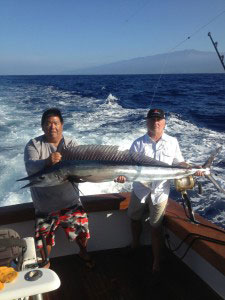 We are in the middle of our usual Spearfish Run in full force here in Kona. We seem to be hooking up with them almost everyday now. The Spearfish run starts around the end of December through the beginning of May. The larger Blue Marlin follow the spearfish in and we have a good chance of hooking a Big One at this time also.

The history of the SHORTBILL SPEARFISH OR (HEBI) as we call it in Hawaii.

Its dorsal fin is shorter than that of other billfish species and its bill is very short in comparison. Hebe caught in Hawaiian waters are usually between 20 and 40 lbs. in weight.

Hebi has a white to pink colored flesh that is somewhat softer than a striped marlin or kajiki. Its flavor is mild. It is one of the several species of billfish which are suitable for grilled or broiled catch of the day menu items in restaurants.

Please go to our facebook page to see all of the recent spearfish and other catches aboard the IHU NUI fleet at https://www.facebook.com/ihunui.

NEWS FOR THE NEW YEAR

Team Kona Fishing Charters continues to have fun and do different things. One of the goals for 2015 is for Captain McGrew and Leader man  Carlton to teach Kona Fishing Charters  owner, Ed Mueller, how to do all the chores of fishing. That includes driving the boat. Just after the first of the year the Kona Fishing Charters took off on a learning day. The launch from the harbor went fine until McGrew asked Ed, who was driving, what he thought Carlton should do with the anchoring rope tied to slip buoy.  Ed obviously needed to pay more attention to all the details. Quickly Captain McGrew sorted out the error and we were on our way.  After that slight oversight fishing began and the route was chosen to go north. After searching for the big one for several hours Captain McGrew suggested going out further to fish in 1700 fathoms of water. For Kona that is not that far off shore but not our normal fishing waters. As always Captain McGrew has a sixth sense and Ed drove over a big Marlin and the fun began. Since the Kona Fishing Charters is followed locally by the press the following article was printed in the West Hawaii paper. I think you will enjoy journalist Jim Rizzuto take on the adventure.

On the perfect team, every player can play every position, or so they say. On Thursday, that strategy worked perfecly for team Kona Fishing Charters when they hooked the biggest marlin tagged last week. Normally, Capt. McGrew Rice maneuvers the boat to keep the fish close, boat owner Ed Mueller handles the rod-and-reel chores, and crew Carlton Arai leaders the fish to the boat for tag and release.

After Thursday’s 500-pounder hit a metal jet lure (blue and pink skirts) off Kaiwi at about 10:30 am, Ed took the helm, McGrew waited for the end game and Carlton got in the chair to do the pump-and-grind for 20 minutes.

Though Carlton has been one of Kona’s top pros for as long as he has been alive, I can’t ever remember a time when he actually reeled in a marlin. McGrew says it has been more than a dozen years, but it has been about seven since McGrew leadered a fish.

From on-the-scene reports and photos, Carlton did it very well. “And Ed did the driving almost as well as a professional captain,” McGrew said. “He has been paying attention.”

Switching positions is not new to big-game fishing here in Kona and might have applications to other sports. After all, a few weeks ago in the Cotton Bowl, a 390-pound Baylor lineman lined up in a receiver-eligible position and caught an 18-yard pass for a touchdown. The next day, Oklahoma State copied the idea and put the ball in the hands of an erstwhile defensive lineman for a 48-yard completion in the Cactus Bowl. But neither of those guys has very much sizeways on our large-and-in-charge guy Carlton.