As a refresher, fishing lures are an artificial bait that is meant to lure the fish over to a fishing line or hook. Lures use movement, vibration, flash and color to bait fish.

Spinnerbaits and buzzpaits aren’t attractive looking lures – they consist of a safety-pin like wire that’s attached to a lead body. The lead body is dressed with a rubber skirt and the arm has one or two metallic blades that are often seen on spinners. All of this fools a fish’s sense of sound and movement. The best way to fish with a spinnerbait is to cast it out and work it so propels along the surface at a moderate speed. 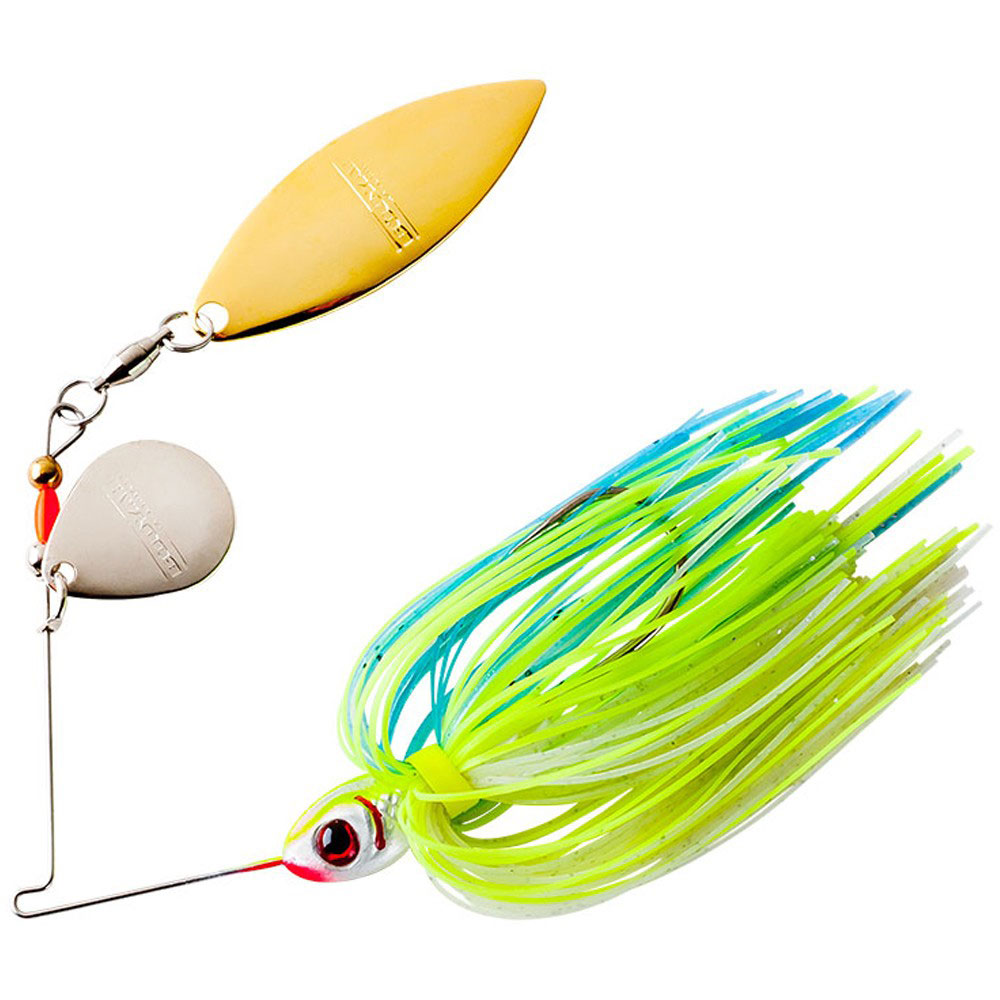 Plugs are fishing lures that splash across the surface of the water attracting attention from any fish you’re trying to catch. These fishing lures in particular draw a reaction bite from predators (and are typically caught once they do that). Fishing plug lures are constructed from hollow wood or plastic and are made to resemble baitfish or other attractive (to your fish) prey that can be found in the water (such as insects).

Fishing plug lures typically have two or three treble hooks attached. These fishing lures can be used at almost ANY depth – some are made to float or dive or both, it all depends on the design. A plug can wobble, rattle, or gurgle. They come in all sizes and there are different kinds of plugs including: crankbaits, jerkbaits, surface plugs, floating/diving plugs, and poppers. Poppers are fishing lures (often used in the saltwater) that splash across the surface of the water that draw a reaction bite from predators.

Flies are another type of fishing lure used, although they are traditionally used with fly fishing equipment more so than spinning gear. However, spinning gear can cast flies too, as long as you add a clear bubble float. Flies are light fishing lures that can imitate insects as well as baitfish, and even leeches. Flies are constructed from fur or feathers but can also be made up of foam or rubber. Fly fishing lures can be wet or dry. Dry flies float on the surface of the water (and will typically be attached to something that floats to help them float). Wet flies are designed to be fished below the surface of the water.

Fishing Lures – Which One is Best for You?

Now that you understand basic fishing lures and how they are used, we should discuss why and how some of these work in saltwater sportsfishing. All of these can be used in saltwater and although most sports fishing game should be attracted by live saltwater bait or cut bait, sometimes these fishing lures can attract bigger fish.

The first thing you need to do is consider how fish feed. Fish typically sense a meal by scent, sound, and/or movement. Sound travels faster through water than through air and so fish can hear fishing lures that are a long way off. Fish also have another sense, called a lateral line that runs down each side of a fish, it’s full of tiny hairs that can detect movement in the water. The fish can sense a moving object (like a fishing lure) and then go after it. Even in clean, clear water, fish can only see colors and shapes, so you should be able to fool a fish with a lure. However, fish are fairly sensitive in regards to taste. This means that not all types of fishing lures can work with all fish. You must fool all of a fish’s senses if you want to catch “the big one”.

This is one great website that helps anglers discover which lure would be best for them depending on the fish they want to catch, we hope this helps you when trying to decide what kind of lures to get

Fishing Lures for Beginners: Part One

If you’re new to fishing, we will help you out when you come fishing with us. However, you may be interested in learning some things before you come out on the water with us. In this article, we’ll be tackling the subject of fishing lures. What kinds work best with what fish, the advantages and disadvantages. This two part blog series should help everyone – novices and experts alike might be interested in taking a look. We hope you enjoy learning more about fishing lures and we also hope to see you out on the Kona water with us.

What are Fishing Lures?

As the name might indicate, fishing lures are an artificial bait meant to lure the fish over to a fishing line or hook. Lures use movement, vibration, flash and color to bait fish.

Jigs are some of the most versatile fishing lures available. They are fairly inexpensive and are able to catch most game fish. Because of this, they are one of the most popular fishing lures available. They are made up of a book with a lead head and a trailer, jigs can imitate everything from live saltwater bait to invertebrates (and everything in between). If you need to catch a fish that’s deep in the water, a streamlined jig head will sink faster while a wider head will flutter down. The size of the jig SHOULD match the size of the trailer – make sure the trailer on the jig is threaded so that the hook comes out the trailer ahead of the bend. Pass the hook once you’re through the wide end of the trailer. When you use a jig lure, just know that jig fishing can take a lot of concentration. This is because how the lure moves in the water depends on you. If you do nothing, the jig will just sink.

Spoons are metal lures that are curved. Actually the first spoon lures were in fact just spoons with handles broken off! Now spoon lures are available in any color or size and can be used for almost any fishing situation.

The shape of this lure gives it a distinctive type of movement – one that almost looks like the way an injured baitfish moves in the water. Game fish, of course, love injured bait fish. If you’re a beginner, you will most likely being using the most common type of spoon – the casting spoon. Casting spoons are heavier than trolling spoons so they can be thrown a long distance.  You will just cast and retrieve this spoon – just varying the speed as long as it’s wobbling. If it starts to spin, slow down your retrieval. Casting spoons are great when you need to imitate a small bait. Some spoons are made to be cast, others to be trolled, and some even to be jigged.

Spinners are another great beginner lure! They’re simple and easy to use. They’re a metal shaft with a spinning blade with a bare or dressed hook – depending on your preference! If you drag the spinner through the water, the blade will spin (which is obviously how it got its name) The spinning creates sound and vibration and attracts any fish that can hear it through their lateral line. You just need to cast and retrieve!

Soft plastic baits can be made up with lots of different lures – the classic, of course, being the plastic worm. They can look similar to most other little fish and creatures like worms, crawfish and lizards. The soft bodies of these lures encourage the fish to hold onto them a little bit longer before they are spat out giving the angler (you!) time. These baits come in a variety of colors, sizes, and shapes – bright colors work best on sunny days while darker days require a darker color bait. Soft plastics can be cast and retrieved.

We will continue this discussion of lures next week right here on the blog. For now, think upon what kind of lure seems to suit you best, and which lures might work best for you when you go fishing with us in Hawaii. Next week, we’ll cover spinnerbaits, plugs, flies, and, of course, which ones work best on the open sea. 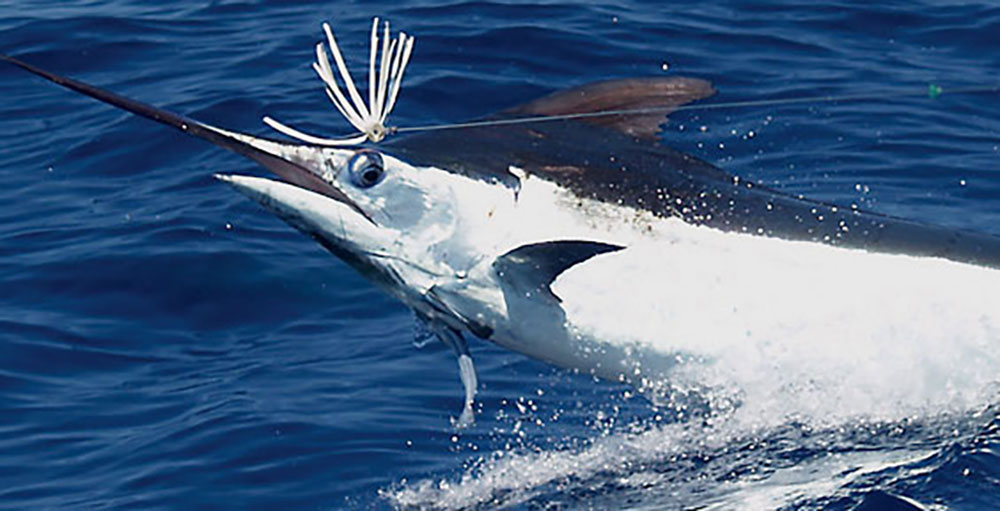 2. Black Marlin are an extremely migratory species of fish. Black Marlins can travel great distances across the oceans. One individual Black Marlin fish has been recorded to have traveled all the way from Australia to the coast of Costa Rica, culminating in a travel distance of over 9000 miles across the Pacific Ocean.

3. The appearance of the Black Marlin is fairly distinctive, like all billfish. However, the Black Marlin is the only marlin with non-retractable fins! Other than that though, the Black Marlin, like all billfish has a sword-like upper jaw. Its dorsal fin is fairly low compared to most other billfish. The dorsal fin stands less than 50% of the fish’s body height. The dorsal fin is dark blue, while its belly is silvery white, and faint blue stripes run down its sides. The blue stripes darken when they’re excited.  While males may reach a length of 4.65 m and a weight of 750 kilograms, females are generally much larger than that.

5. Although the Black Marlin’s appearance and migration patterns have been well examined, scientists know little of the Black Marlin’s longevity. They have very few ideas concerning how long Black Marlins live – their natural lifespan is still a question mark for the scientific community.

6. Black Marlins spawn by external fertilization. A single pregnant female can carry up to 40 million eggs!

7. These fishes are considered one of the fastest swimmers on earth, often speeding up to 80 mph (130 km/h). They zip through the ocean.

8. Typically, Black Marlins tend to remain in shallow waters. Since this species belongs to the indo-pacific region that means that the Black Marlin is found near islands and coral reefs. The Black Marlin rarely swims below a depth of 30m. Due to their migratory nature at times they enter temperate waters rather than just tropical.

9. In terms of records, the largest Black Marlin recorded weighed in at 1656 pounds and the oldest Marlin found was 32 years old.

10. The species can fight fishermen for long hours. They’re very strong and very fast which makes catching them a fun battle. Not only that, but they often make spectacularly huge jumps out of the water when battling with a fisherman. They also tend to go deeper than normal in order to escape. Artificial lures and live bait are used to pull the black marlin from the water.

There are even more amazing facts about the Black Marlin. When you book a charter for marlin fishing in Kona with us out on the beautiful Pacific at Kona Fishing Charters, we’ll answer your questions about the Black Marlin (or any other Kona fish you’re interested in) as best we can. But there’s nothing like seeing a Black Marlin for yourself, especially once you hook it and bring it aboard.

Next time in our series of Kona fish facts, we’ll give you some interesting facts about the spearfish, another Kona fish you will probably see when you come out to fish with us at Kona Fishing Charters! Call us at (808) 960-1424 to book your fishing trip!