NEWS FOR THE NEW YEAR

Team Kona Fishing Charters continues to have fun and do different things. One of the goals for 2015 is for Captain McGrew and Leader man  Carlton to teach Kona Fishing Charters  owner, Ed Mueller, how to do all the chores of fishing. That includes driving the boat. Just after the first of the year the Kona Fishing Charters took off on a learning day. The launch from the harbor went fine until McGrew asked Ed, who was driving, what he thought Carlton should do with the anchoring rope tied to slip buoy.  Ed obviously needed to pay more attention to all the details. Quickly Captain McGrew sorted out the error and we were on our way.  After that slight oversight fishing began and the route was chosen to go north. After searching for the big one for several hours Captain McGrew suggested going out further to fish in 1700 fathoms of water. For Kona that is not that far off shore but not our normal fishing waters. As always Captain McGrew has a sixth sense and Ed drove over a big Marlin and the fun began. Since the Kona Fishing Charters is followed locally by the press the following article was printed in the West Hawaii paper. I think you will enjoy journalist Jim Rizzuto take on the adventure.

On the perfect team, every player can play every position, or so they say. On Thursday, that strategy worked perfecly for team Kona Fishing Charters when they hooked the biggest marlin tagged last week. Normally, Capt. McGrew Rice maneuvers the boat to keep the fish close, boat owner Ed Mueller handles the rod-and-reel chores, and crew Carlton Arai leaders the fish to the boat for tag and release.

After Thursday’s 500-pounder hit a metal jet lure (blue and pink skirts) off Kaiwi at about 10:30 am, Ed took the helm, McGrew waited for the end game and Carlton got in the chair to do the pump-and-grind for 20 minutes.

Though Carlton has been one of Kona’s top pros for as long as he has been alive, I can’t ever remember a time when he actually reeled in a marlin. McGrew says it has been more than a dozen years, but it has been about seven since McGrew leadered a fish.

From on-the-scene reports and photos, Carlton did it very well. “And Ed did the driving almost as well as a professional captain,” McGrew said. “He has been paying attention.”

Switching positions is not new to big-game fishing here in Kona and might have applications to other sports. After all, a few weeks ago in the Cotton Bowl, a 390-pound Baylor lineman lined up in a receiver-eligible position and caught an 18-yard pass for a touchdown. The next day, Oklahoma State copied the idea and put the ball in the hands of an erstwhile defensive lineman for a 48-yard completion in the Cactus Bowl. But neither of those guys has very much sizeways on our large-and-in-charge guy Carlton.

The Blessing Ceremony of our New Fleet.

Last Saturday we held the blessings of our new boats the IHU NUI and the IHU NUI II. This sacred ritual is called “lolo ana I ka moku (imparting brains to the boat), was used by ancient kahuna (priests) to consecrate the launching of a new canoe. In accordance with cultural protocol, the ceremonial dedication commenced with a pule kahea (sacred prayer chant) to invoke the presence of the benevolent Hawaiian deities. Using a koa bowl filled with coconut water and a lau ki (ti leaf), kahu performed the customary pi kai (sprinkling blessing) with the kōkua (help) of the boatowner, to spiritually sanctify the vessel and remove any taboo. The ceremony was performed by Rev. Daniel Akaka and his wife Anna and as they encircled the two boats, they called upon the Hawaiian akua and ‘aumakua (ancestral guardian spirits) to watch over, guide and safeguard the boat on its seafaring ocean voyages to and from Hawaii’s shores. Maile Leis were fastened to the bow of the boat for protection. The blessing ceremony concluded with the sharing of aloha and kahu saying, “E au ana ‘oe iloko o keia moku me ka palekana a me ke aloha o na Akua.” (You may travel inside of this boat with safety and the blessings of the heavenly ones.

This was a beautiful sunny clear day in Kona after a storm had just passed the day before and we were surrounded by family and many special friends and other Captains from Honokohau Harbor. After the ceremony we were also blessed to have had the Luau provided by Sam Choy, his lovely wife Carol and their son Chris.

We hope that you will all come over to the Big Island soon to experience our New Rides.

Aloha from your IHU NUI Family 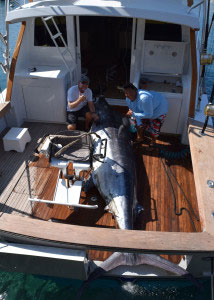