Tagging, New FAD in town & More Sashimi for the Holidays

November brings much news to be Thankful for this Holiday Season. Researchers are launching a new tagging program for AHI in West Hawaii that will help them better understand the patterns of this highly migratory and elusive fish. With the help of area fisherman the $4000.00 devices will be tagged into five Big Eye Tuna that are 70 pounds or larger this winter. Designed to read water temperature and depth and to transmit location to a satellite, the tags will help researchers understand how fish behave and how environmental factors may influence their migratory pattern.

The research is a collaboration of the Pacific Island Fisheries Group, West Hawaii Fishermen and the Large Pelagics Research Center, and is sponsored by the Western Pacific Regional Fishery Management Council. The project was unveiled at a gathering of fisherman, researchers and fishery council staff in which Capt. McGrew Rice was present.

New FAD in Town…..Kona fishermen and the council are also collaborating on a device to attract fish, which has already been deployed about 20 miles off Kealakekua Bay. Numerous fish species congregate around the anchored floats, essentially creating offshore fishing holes. The fish aggregation device is designed to increase fishing opportunities and aide in data collection and research. This will also reduce the searching for fish and will help with fuel costs. The placement of the anchored 12-foot long skiff and GPS beacon is strategic according to captain McGrew Rice who is a member of the council. “It’s central where private FAD’s were put out there that have worked in the past very well and considered a proven area”

More Sashimi for the Holidays…..Hawaii fisherman got other good news. The state’s longline fleet can now contract with the Commonwealth of the Northern Mariana Islands for a portion of it’s AHI quota. The additional fish will help head off shortages of sashimi during the New Year’s holiday. For many years, the threat of a shortage during the holiday’s has caused higher prices for families and less productivity for our fishermen. We are pleased that NOAA and the Hawaii longliners…ensuring families won’t experience any shortage of sashimi when ringing in the New Year. 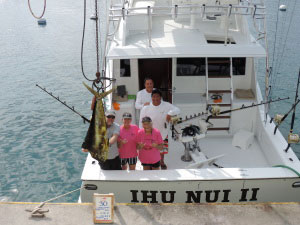